I wanted to let everyone in Eastern Idaho know about the Rexburg Mini Bazaar on Saturday March 29th. Its going to be the craft fair of the season!

Where: The APX building on Main St.

I've been tagged: My Spouse 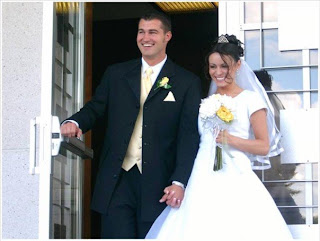 Since I was tagged by about 7 people with this thing i decided I would do it, plus it was kind of fun to reflect on our past dating life and our relationship. So here it goes.

How did you meet your spouse? Well I worked in the bookstore with this guy Nathan Roberts, (he lived with arch before their missions) he would always tell me about his friend Archie and how cool he was, he was still on his mission and was coming to school in the winter. Well you know how guys talk up their friends but they always turn out to be well... you know... anyway the first day of winter semester they came into thebookstore to buy books and I was smitten.
Where did you go on your first date? We pretty much hate this question because neither of us really remember it. We think it was either going ice skating, or dairy queen. We hung out a
lot with his friends so our actual dates are kind of a blur. 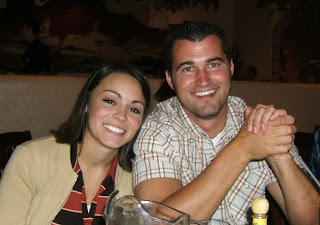 How long have you been together? We dated for a year and a half and have been married for almost four years, so grand total as of right now 4 years and 9 months.
Who eats more? Typically, Arch does, but when I'm pregnant I put him to shame. 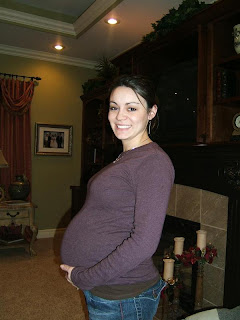 Who said I love you first? Arch did--but let me preface the story- We had been dating for a year and had never EVER talked about anything serious ever, so I was beginning to think nothing was ever going to happen between us, we would just date forever because Arch wasn't capable of deep conversations...well he finally said it one night, and instead of me saying I love you to, I first said "You do?" all bewildered like. Of course I said I love you too a few minutes later, but apparantly it freaked Arch out that I didn't believe him, and he didn't said it again until about 3 months later.
Who is taller? He is. 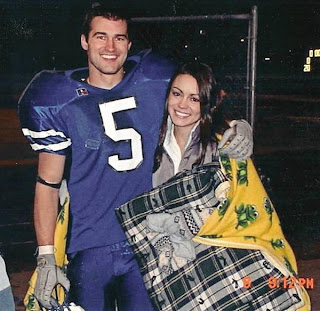 Who sings better? I do, Arch can actually sing decently when he's trying to be funny, but when he tries to sing like in church, he's all over the place.
Who is smarter? Mostly he is, there might be a subject or two that I'm smarter in.
Who does the laundry and the dishes? I do, he might help out here and there with putting laundry in the washing machine, but I would feel safe to say he has folded the laundry 4 times in our marriage. But in his defense its mostly becaue he doesn it wrong and I'd rather do it right, he does do the dishes here and there and will help when I ask.
Who sleeps on the right side of the bed? Well I really don't know, at our house Arch does, but when we sleep other places it changes, i wonder if it has to do with where the door is placed or the direction the room is facing... weird. Wait a minute I know, Arch sleeps closest to the Alarm clock because I sleep through them.
Who pays the bills? Arch does, he doesn't trust me to do them, I'm way to forgetful.
Who mows the lawn? Arch does, he's incharge of the outside stuff and the cars, and I'm in charge of the inside chores, but we do help eachother; its a little 1940's but it works for us.
Who cooks dinner? I do, because if I don't he makes chilli-mac, which is the most revolting mess of nastiness.
Who drives when you are together? He does--he always says he's a professional driver (he drove UPS trucks for a summer).
Who is more stubborn? We both are, we're both first borns so its kind of in our blood. However I would say Arch is and Arch would say I am.
Who is the first to admit when they're wrong? I will admit Arch is usually, he's always been really good at that, I'm so stubborn I hate giving in first, although sometimes I will say he's right (even though i know I'm right) when I get annoyed of arguing.
Whose parents do you see the most? my parents they live about 15 minutes away from us.
Who kissed who first? Well I guess I kissed him first, but it was about dang time it had been two months already! 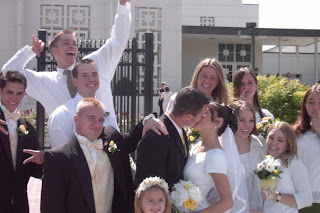 Who proposed? He did, and it was the most amazing day, I was so shocked to see the amount of romanticness come out of arch...but we joke and say he used up his romantic abilities for the next 10 years... which has been about right so far. (just kidding, he's done about 3 romantic things since)
Who is more sensitive? I am... but Arch can be too, I think it would suprise many of you.
Who has more friends? I do, Arch seems to think he doesn't need any besides Zach, the Roberts brothers and Scott. Plus he says he isn't good at being social...whatever that means. 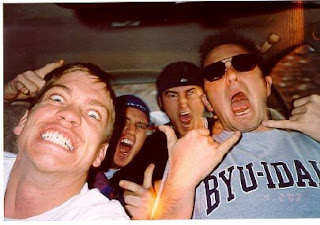 (See what I mean)--thanks to logans facebook for these pictures. 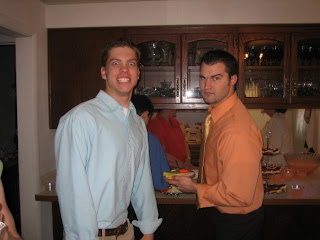 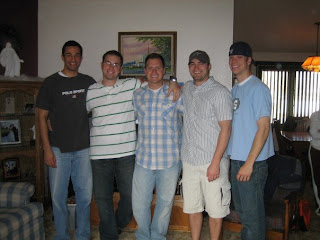 Who has more siblings? Arch does... 2 brothers 2 sisters. I have two sisters one brother.
Who wears the pants in the family? Oh Arch would say he does and I would say I do, so we probably trade off.